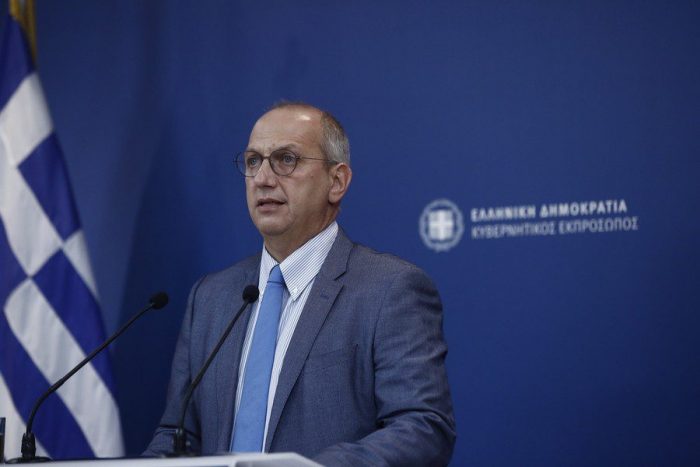 Akar statements based on ‘lies’ and ‘a distortion of the reality in the Aegean’, Economou says

“The monotonous repetition of a lie does not make it true and the entire international community has realised this,”
government spokesperson Yiannis Economou said on Tuesday in response to statements by Turkey’s defence minister, Hulusi Akar.

Speaking on SKAI radio, Economou described Akar’s statements as “extreme” and said they were “based on lies, the distortion of history, of international legality, of treaties and of the reality in the Aegean.” Greece replied in “a very effective manner, keeping the door closed to provocations and the windows open to dialogue,” he added, stressing that Athens was “entirely unyielding on issues that concern our territorial rights and our national sovereignty”.
The spokesperson was responding to a statement by Akar on Monday in which he accused Greece of stoking tensions in the region with “provocative actions and provocative rhetoric” and claimed that Turkey was instead striving to ease them
and “doing everything we can to prevent this”.

Economou also pointed out that the prime minister has at no time refused to discuss or hold dialogue, while Greece’s
arguments are based on international law. “We have proved that our country is a force for stability in the Aegean and the Southeastern Mediterranean, which is fully aligned with our allies and partners against revisionism, with absolute respect for the sovereign rights of states and a willingness for good neighbour relations, on condition that these things are
mutually accepted by both sides,” he said.

The spokesperson said that Greece has made great strides in recent years as regards its deterrent capability, which
adds to its self-confidence, while Turkey must understand that its insistent tactics of rhetorical escalation and provocations “may serve the domestic political situation for Turkish officials but leads absolutely nowhere”.

Talking about the energy crisis, he said the government was planning measures to help with rising natural gas prices
but this assistance would not be as high proportionately as that for electricity, while the suggestion to switch to heating
oil was not compulsory. He clarified, however, that natural gas will not be excluded from the heating benefit and that
there will be a further support policy for natural gas. On diesel, he said there were not plans for a “Fuel Pass 3” programme at present, while a series of measures and financing instruments to facilitate a switch to new appliances and installations that use less and cheaper energy.

Talking about domestic politics, Economou said that the current system of simple proportional representation in
the upcoming elections might yield a weak parliamentary majority for a coalition of leftwing parties but this would be
a “political monstrosity” as it would exclude the party with the most votes.